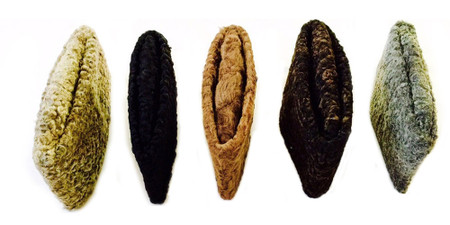 A Karakul (Qaraqul) hat (Persian) is a hat made from the fur of the Qaraqul breed of sheep. The fur from which it is made is referred to as Astrakhan, broadtail, qaraqulcha, or Persian lamb. Qaraqul means Black fur in Turkic, similar types of hats are common among Turkic peoples. The hat is peaked, and folds flat when taken off of the wearer's head.

The qaraqul hat is typically worn by men in Central and South Asia. Hamid Karzai, President of Afghanistan, famously wears a qaraqul hat. Since his presidential appointment, qaraqul hats have become more popular among men in Afghanistan

Both the velvet and faux fur versions are worn by men of African descent with Western suits, and African attire such as the Grand boubou. Muslims of African ancestry wear these caps with the dishdasha. In urban slang, the Karakul cap is called a fur kufi, while the Rampuri cap is called a velvet fez hat. When worn properly, these caps are always slanted at an angle, and never placed straight on the head. Leopard print Jinnah caps are common in Africa, but are rarely seen in the United States. In popular culture, Eddie Murphy wore the Jinnah cap in the movie, Coming to America.

Made from 100% Karakul Lamb FUR

The hat is hand made from Natural fur therefore, the color and height and curls of each hat may vary slightly!

Each hat has a unique pattern!!!

This product hasn't received any reviews yet. Be the first to review this product!