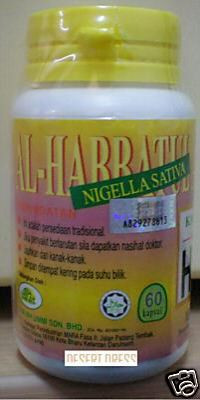 The chemical analysis revealed that it contains carotene
which is coverted in the liver into vitamin A, the useful
vitamin which is well known for its anti-cancer activity.

It is also proved that it contains potent sexual hormones
and other useful compounds.  It contains the secrets of
cure such as enzymes which aid digestion and help
neutralise body-acid.

It also contains phosphates, Iron and carbohydrate
compounds together with antibiotics which are capable of
killing germs.

It is discovered that Black Seed activates the body
immunity system increases resistance to diseases.

It has been used for generations to cure all kinds of
ailments.

Certfied Halal by the Malaysian Halal Board

Adults and Children over 15 years: 2 Capsules a day, 1 in
the morning and 1 in the evening, after meals Children
aged 5-15: 1 Capsule a day after meals

Black seed should not be taken by women who are
pregnant or who are having their monthly periods as its
cause’s contractions in such cases.

This product hasn't received any reviews yet. Be the first to review this product!